First, thank you to all 3,100+ participants from every state in the union, nearly every continent, and from all over the world for being part of something truly special. The M4Max Challenge, aka the Masters for Max, honors kids who struggle with an incurable, life threatening disease by raising money for children with Type 1 Diabetes to attend a truly life-changing summer camp.  I cited some stats in an earlier message, but our pool allows a strikingly high percentage of children who do not have the means to attend Camp Ho Mita Koda, and through your participation and generosity of so many, we’re able to change not just one life but hundreds of lives.  Awesome.

I just got off the phone with a shellshocked Phil Stevenson, who lives in Tallahassee, Florida, and who has absolutely no clue how on earth he backed into winning $20k at the VERY. LAST. SECOND.

With a 5 shot lead, I doubt I’m getting ahead of myself, but it looks like Scottie is about to be your 2022 Masters champion.  The 2022 M4Max, on the other hand, is very much up for grabs, and it looks like it’s going to come down to the tiebreaker.

One more thing on the tiebreakers, the “Comeback Award” will not use the tiebreaker.  That’s for the best 36 score on the weekend.

Our 2022 M4Max Champion will be crowned soon.  Stay tuned!

As of this writing, Cam Smith just dunked it on 12 and made a triple.  I haven’t even looked at our M4Max Leaderboard, but the last time I did we had a 7-way tie.  I want to make sure I’m clear in advance about how I’ll handle a potential multiple player tie.

Friends, as I write this Scottie Sheffler has thrown a dart into #9, Rory McIlroy is en route to shooting 56, and anyone who chose the Northern Irishman on their team has been on an elevator ride straight to the top of our M4Max Leaderboard.  As it type there is a 7 WAY TIE FOR FIRST.  Remember when I said how weird it is that there are never any ties?  Welp.

I solicited pictures of babies being baptized by Reverend Nantz during their first Masters, and received numerous awesome pictures.  Jared Glowaski was quickest on the draw with his picture of Max, and he wins $50.

No? Well in that case.  How’d you like to play a round of golf with former PGA tour star Ben Curtis?  The catch is, you’ve got to play with yours truly as well.  If you donated an “extra” $20 or more to this year’s 2022 M4Max Challenge, your name is loaded into a spreadsheet with a chance to win a round with Ben and me this summer*.

Let Me Tell You About Max

First, he needs a haircut.  You can’t really tell in this picture because apparently it’s a crime for middle schoolers to go anywhere without a hoodie these days, but he currently looks like a sheepdog. 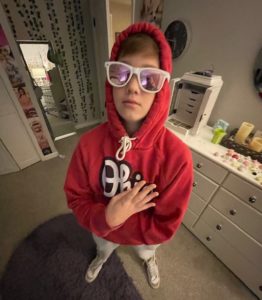 Also, his 17 year-old sister likes to dress him like an idiot, which he apparently indulges.  And is that a gang symbol? Should I be concerned?

Second, today Max is 14, and he checks pretty much every box you’d expect an 8th grade boy in America to check: obsessed with sports, loves to hang out with his buddies in the neighborhood and play video games and driveway basketball and whatever game they invent that day, could watch Tik Tok for hours if we let him, lives in sweatpants.  He’s genuinely a great kid, and he’s got such a great sense of humor.  A little over a decade ago, though, I would have had a hard time imagining just how “normal” his life could seem.

Click here to read about Max and other amazing T1D stories.

For 17 holes today, recently crowned #1 golfer in the world Scottie Sheffler threatened to turn this year’s Masters into a snoozefest.  The most exciting part was watching him put his vest on.  And then take it off.  And then put it back on.  Yaaaay.  sldkjfoiejroqijef;lkndf;a kldj   Sorry, I just fell asleep typing that and hit my head on the keyboard.

A Tradition Unlike Any Other

Hello friends, and welcome again to the tradition unlike any other.  It is officially the weekend at the Masters.

Speaking of traditions, Augusta National is loaded with them.  The honorary first tee shot that marks the official start of the tournament.  The green jacket ceremony in Butler Cabin.  Pimento cheese, the drive down Magnolia Lane, old school manual scoreboards.

I Have Nobody To Blame But Myself

You know how there are certain moments in your life when you immediately regret the decision you’ve just made?  Yeah.  As soon as I hit the “Send” button on my previous email, the one that included the Paige Spiranac Challenge, I knew I’d gone too far.

Second, to anyone I’m about to offend, well, you’ve come this far.  You might as well keep going.  Because I want you to look at what the Paige Spiranac Challenge hath brought.  Click here to read and see more.

Can He Turn Back The Clock?

I think we all know the story about the young, preternaturally talented phenom who once dazzled the world with his physical gifts, only to have an embarrassing fall from grace at the height of his fame that forced him away from the sport. And yet, battling age, a plethora of injuries, and a skeptical press, that same man then returned to the world’s biggest stage with many saying he was well past his prime.  Injured, worn out, under more pressure than most men could bear, that man improbably demonstrated why many still call him the greatest.

Of course I’m talking about New York Knights Right Fielder Roy Hobbs, who in his final at-bat smashed a ball so far it collided with the outfield lights, thus causing an inexplicable electrical shortage and a dangerous high voltage situation that rained fire upon the thousands of horrified fans being scorched by falling embers as Hobbs solemnly circled the bases.

Will Tiger Woods have his Roy Hobbs moment at the Masters this year?  Click here to read the full update.

A Legend is Born

Confession time:  Each year, in the weeks leading up to the M4Max Challenge, a knot grows in the pit of my stomach.  It’s the anxiety I feel about generating content worthy of your hard-earned admission ticket to this contest.  In hindsight, though, I needn’t worry, because I have friends from all over the country who routinely feed me ideas for contests and memes.  For example, Stacey Iofredo is an old friend and OG M4Max Participant living in Ponte Vedra Beach, FL, and she recently texted me the video of Joel Dahmen’s caddie, Geno Bonnalie, partaking in the “One Chip Challenge” (for the unitiated, the “One Chip Challenge” is a sort of double-dog dare, where people eat a single tortilla chip coated in Carolina Reaper pepper dust, the hottest pepper on the planet at something like 1.5 MILLION Scoville units).  Stacey suggested this would be a great M4Max contest, and boy, was she right. 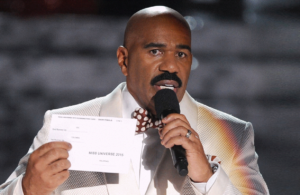 It appears we jumped the gun on our Round 1 winners.  Randy and Jesse, you’re still in the money, but you now need to share it with John Hudec.  There was a glitch in the matrix, as we accidentally shut the Leaderboard down about 2 minutes early, and it screwed up some scores.  So, there’s a 3 way tie at the top between Randy Lewandowski, Jesse Shamp and John Hudec, who share $2,500.  Congrats John!  Congrats/Sorry Randy and Jesse!

I Should Know Better by Now

When I started the M4Max Challenge, I never envisioned enlisting an army of wannabe-Photoshoppers and Meme-Makers to unleash an avalanche of absurd and occasionally over-the-line “art” upon the unwitting participants of this pool.

And yet here we are.

Click hereI Should Know Better by Now for the update.

Let’s get this party started

Hello friends, and welcome again to the Masters pool unlike any other, the M4Max Challenge.  It’s time to pop the champagne, too, because we once again shattered all prior records for entries and ultimately, money raised to send kids to Camp Ho Mita Koda.  Check out these stats:

Copyright © 2022 Propel Marketing Group. All rights reserved.
Back To Top